“Dose of Reality” Breaking Down the Big Pharma Dollar

Part I: The Math Undercuts the R&D Defense

The average American spends $1,200 per year out-of-pocket on prescription drugs.  Altogether, the 10 largest U.S.-based Big Pharma drug manufacturers pulled in a colossal $245 billion in revenue in just one year.

As prescription drug prices continue to climb, causing one in four Americans to not be able to afford their medications, do you ever wonder how Big Pharma spends all those dollars?  We set out to get you the answer.

CSRxP, in partnership with GlobalData, conducted a study to determine how Big Pharma allocates revenue across six categories and broke down to the dollar: 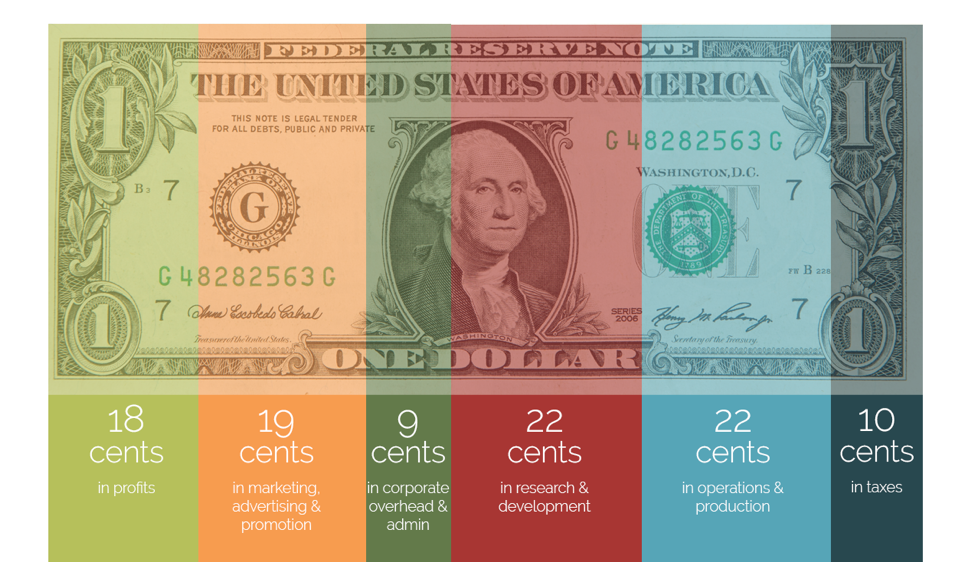 Today, we’ll explore how the numbers undercut Big Pharma’s favorite excuse: that higher prices and sky-high revenues are required to fund research and development (R&D) on new cures and innovations.

Abbvie CEO Richard Gonzalez: “Our system is built around a variety of pricing, around the world, but that overall [our] system supports our R&D model.”

Pfizer CEO Albert Bourla: “That’s how we price… The industry needs a return that allows it to continue to do its research.”

Eli Lilly CEO David Ricks: “I think what patients want are new cures… We have to rebalance the system, which has become stacked against pharmaceutical innovation.”

Unfortunately for Big Pharma, the math doesn’t match the rhetoric.

Our study found Big Pharma invests more boldly in advertising, corporate overhead and profits (46 percent) than R&D (22 percent) by a margin of more than two to one.

Three of the top 10 Big Pharma companies even banked more in just profits than they invested in R&D.

Pfizer won the distinction of worst offender.  The Big Pharma giant, the largest by overall revenue, spent just more than 14 percent of revenue on R&D. Altogether, the company:

Big Pharma loves to hide behind the R&D defense and blame others for rising prescription drug prices.  It’s critical for the American people and policymakers in Washington to see through the empty rhetoric and hold the industry accountable with market-based solutions to crack down on price-gouging and anti-competitive practices.

In the coming days, we’ll be taking a closer look at where Big Pharma’s dollars are really going and how their rhetoric just doesn’t add up.