Washington, D.C. – The Campaign for Sustainable Rx Pricing (CSRxP) released an analysis Tuesday that found brand name prescription drug manufacturers used a windfall from the Tax Cuts and Jobs Act of 2017 to line shareholders’ pockets, rather than invest in research and development (R&D).

“For Big Pharma to spend its huge tax windfall lining the pockets of shareholders rather than investing in research and development tells you all you need to know about the industry’s priorities,” CSRxP executive director Lauren Aronson said. “For all the bogus rhetoric about ‘innovation’ in Washington, brand name drug makers continue to clearly prioritize profits before R&D.”

“Big Pharma and its allies continue to oppose bipartisan, market-based solutions to lower prescription drug prices by claiming the reforms will hamper ‘innovation,’” Aronson continued. “The numbers and Big Pharma’s past behavior completely undermine the credibility of that argument.”

CSRxP analyzed financial data aggregated by S&P Capital IQ for the ten largest U.S.-based pharmaceutical and biotech companies, for which prescription drug sales represented at least half of revenue. The analysis found that in response to savings generated for the industry by the Tax Cuts and Jobs Act of 2017:

Last month, a study published by the American Academy of Neurology found the staggering price of medications to treat multiple sclerosis (MS), a rare neurological disorder, are driven largely by profit motivations – not research and development (R&D).

Read more on the study in the American Academy of Neurology journal HERE.

The new CSRxP analysis also underscores the findings of CSRxP’s “Big Pharma Dollar” study released in May that found Big Pharma invests boldly in profits and advertising — not research and development.

The study, conducted in partnership with GlobalData, found the largest pharmaceutical manufacturers in the U.S. spend just 22 cents out of every dollar on R&D. It also found Big Pharma spending on advertising, corporate overhead and profits is more than double funding for R&D. 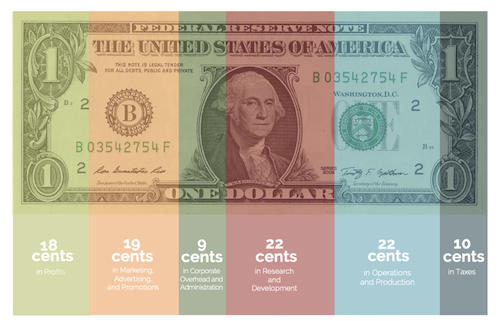