THE CRISIS OF RISING PRESCRIPTION DRUG PRICES
The anti-competitive tactics and price-gouging practices of Big Pharma have created a crisis of prescription drug affordability in America. Today, as many as one-in-four Americans are unable to afford their medications. Despite the mounting crisis, brand name drug makers continue increasing prices and fighting to evade responsibility.

In June 2019 alone, Big Pharma hiked prescription drug prices on 106 drugs by an average of 27 percent. Another recent report found overall drug prices climbed by 10.5 percent over the past six months – four times faster than the rate of inflation. Over those six months, prices increased on a whopping 3,443 drugs, compared to 2,919 drugs the previous year.

AMERICANS WANT LAWMAKERS TO HOLD BIG PHARMA ACCOUNTABLE
In a deeply divided Washington, lowering drug prices is one of the few areas where both chambers of Congress and the Trump Administration have a real opportunity to work together, across party lines, to deliver results for the American people. The American people are demanding action to hold Big Pharma accountable and lower prescription drug prices.

Voters Across the Political Spectrum Are Demanding Action:

BIPARTISAN SOLUTIONS ON THE TABLE
Despite rising political pressures in Washington, there has been earnest bipartisan cooperation on drug pricing solutions and there is broad, bipartisan support for a number of key drug pricing reforms that will hold Big Pharma accountable and lower drug prices.

Solutions with broad, bipartisan support from House Democrats, Senate Republicans and the administration include: 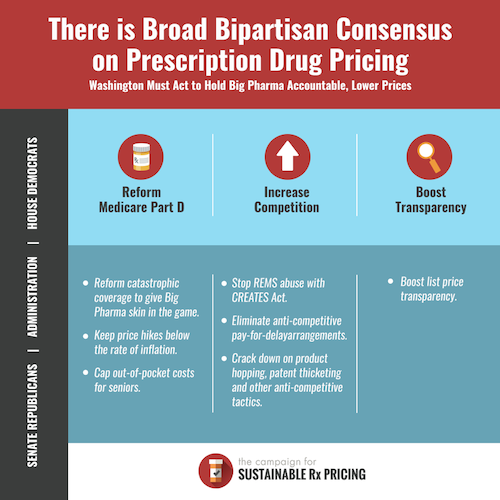 With only a finite number of legislating weeks left in 2019, it is critical lawmakers capitalize on the unprecedented momentum to hold Big Pharma accountable and lower prescription drug prices by coming together to get these bipartisan solutions passed into law.