“Dose of Reality” Breaking Down the Big Pharma Dollar

Part III:  As Prices Rise, So Too Does Ad Spending

The average American spends $1,200 per year out-of-pocket on prescription drugs.  Altogether, the 10 largest U.S.-based Big Pharma drug manufacturers pulled in a colossal $245 billion in revenue in just one year.

As prescription drug prices continue to climb, causing one in four Americans to not be able to afford their medications, do you ever wonder how Big Pharma spends all those dollars?  We set out to get you the answer.

CSRxP, in partnership with GlobalData, conducted a study to determine how Big Pharma allocates revenue across six categories and broke it down to the dollar: 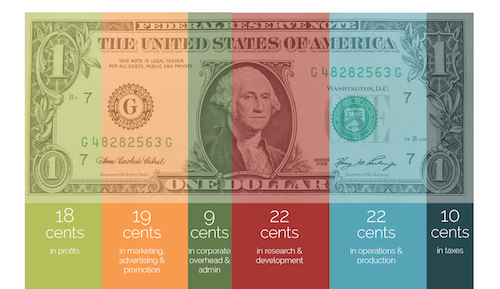 So far, we’ve poked holes in Big Pharma’s faulty defense that they have to raise drug prices because they need the money for research and development (R&D).  Yesterday, we looked at Big Pharma’s soaring profits. Today, we’re looking at one of Big Pharma’s fastest growing spending priorities: marketing and advertising.

It’s almost impossible to turn on your television without seeing a commercial for a brand name prescription drug.  Ads for blockbuster medications like Humira, Lyrica and Chantix are everywhere – and it’s no wonder considering how much money Big Pharma is pouring into marketing.

The CSRxP and GlobalData study found more than 19 cents of every Big Pharma dollar goes to marketing and advertising — a whopping $47 billion when looking at just the top 10 U.S.-based drug makers.

And that number appears to be on the rise.

The Big Pharma giants who are spending big on advertising are also among those who are the most aggressively raising prices on their top-selling drugs.

Take AbbVie and its top-selling drug Humira, for example:

Pfizer was no different:

These Big Pharma giants who are investing boldly in advertising received a dose of badly needed medicine last week.

The U.S. Department of Health and Human Services (HHS) announced that starting in June, drug makers would be required to disclose list prices in their ads.  A move to bring much-needed transparency to the marketplace.

Big Pharma’s trade association complained after the announcement and were met with a swift response:

Tomorrow, we will wrap up our series by taking a look at Big Pharma’s tax conundrum.

CLICK HERE to read: Breaking Down the Big Pharma Dollar Part I: The Math Undercuts the R&D Defense.

CLICK HERE to read: Breaking Down the Big Pharma Dollar Part II: An Industry Booming Off of Price-Gouging.